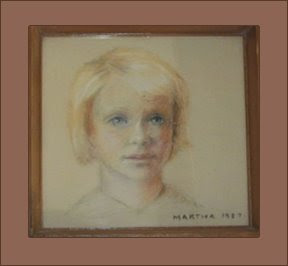 This is going to be the story of our number three child who was born April 4. When we found out I was pregnant again, we were overjoyed. There had been no help from science, no medical measurements were taken. We had accomplished this wonder all by ourselves. And from the moment we found out, I kept saying to myself, THERE WILL BE NO MIDDLE CHILD SYNDROME FOR THIS ONE. We were both happy and followed her development with bated breath. It was an uneventful pregnancy, and when we finally got to meet Martha, and found out she was healthy and beautiful we were relieved and happy. Sam wanted to name her Martha after an Aunt he had grown fond of during his college years, and a Martha Eklund who worked for my mother after I was born, and who became my best friend, which friendship lasted until she died when I was about sixty.

Martha had only a few whisps of reddish blond hair in the back of her head. The rest of her head was totally bald. She had huge blue eyes. And her smile was unbelievable. And she smiled all the time. She did more for us than we did for her, for she entertained us and made us laugh out loud every time we paid attention to her.

As a toddler she was even more an entertainer. She could make the whole family happy, just watching her. She walked early and she began playing with child Jigg-saw puzzles before she walked. A good friend, who lived down the street from us used to stop in at a toystore on her way home from school ( she was a first grade teacher ) to buy simple puzzles with just five or six pieces to test Martha. How long would it take her to finish it. Martha finished it the first time she tried in just a few minutes.

One thing Martha could not do. She could not talk. When she did try, which she did constantly, she would sound as though she might be deaf. She had no consonant sounds. If she tried to say 'OK, Gilbert', she would say Oh hey Oh hey. We of course all understood her and she did not seem to get frustated. When she went to kindergarten her teacher got excited and tried to force certain sounds out of her mouth. So I decided I had to take some action. Without Martha hearing any of my preparations I consulted an MD downtown. I asked if he would put a cast on one of her arms. I had read that if the motion center in the brain was uncertain about being right handed or left handed, then the speech center was slow in developing also. He said WHAT REDICULOUS ROT. I said I will show you the article I read. And I also said we had to pretend that Martha had hurt her arm during the night. He said, Bring her in and I will talk to her.

This good friend listened to Martha talk for about twenty minutes, She sat in front of him and answered every question he asked, and he who had never heard her before, understood not a word. I had told her, when she woke up that morning that she had hurt her arm during the night. She did not remember that, but she was happy the doctor was going to fix it. The doctor had told me earlier that if he agreed to do it, he would only agree to do the left arm. The cast had to be on at least one month.

When that month was up we returned to get the cast off. And then he sat down and almost repeated the discussion he had had a month earlier. And Martha answered with consonants and clarity. He was amazed. He could not believe what had happened. And if it had not been for the teacher who got busy with speach lessons Martha would never have known about her early problem. And then she might never have become a speech therapist.

There is so much more to tell about Martha, but it will have to be a later episode.

Martha, have a wonderful Birthday. And remember I love you. And remember that you have always done more for us, than we have done for you. You are still a surprise and such a fine person. love Mom
Posted by svensto at 6:07 PM

Such a beautiful entry. My heart feels warm after reading it!

Oh...I just got nice chills from that beautiful story. Now I want to go back to see the picture of the children with the King of Sweden to see which one is Martha. Thank you! (Happy Birthday, Martha!)

Aw, Mom, you've made me cry. What a wonderful birthday surprise.

I love you more than I can say. You've always believed in me and given me so much more than I can ever repay. Truly. Your belief in me helped me learn to believe in myself.

Happy birthay, Martha. The way you describe your family, Svensto is always moving.

Wonderful blog post! It completely warmed my heart.
My son is Autistic--so I know the labor of finding cures and standing by them because the Mom heart says they will work.

happy birthday to your Martha :)

Svensto, I so enjoy your stories. I also love to see your works. Please continue to share both with us.

Your stories are so wonderful as is your art. Please don't stop blogging!
(Happy Birthday, Martha!)

Martha has been a huge part of my writing and friendship life for over ten years now--I'd heard bits of this story from her but never the whole thing. Thank you for sharing--the story AND your lovely daughter! She still has that smile and we benefit from it all the time.

What a lovely story! I got tears in my eyes as I read it.
How nice also, to see Martha's response and to hear how much she loves her Mama!
Happy birthday Martha!

Thank you for sharing your beautiful daughter with us. We love her...

Martha and I have shared so many precious , beautiful years as best friends. This makes my life strong, filled with love and fun. How fortunate that we met so many years ago. Thank-you for bringing Martha into this world. Hope to see you soon. Linda Woods

A wonderful story about my dear friend, Martha, who I've only lnown as an adult. Now I can see how she became the engaging and thoughtful person I know. Jimmy

Your third child is a great gift to many. I'm one of the fortunate ones to have Martha as a loving pal. That brilliant smile of hers is one of her trademarks. Her nickname is "Light" and she definitely lights up our lives. Thank you, Gertrud, for having given birth to my beautiful friend.

Your fan (ever since I met you and heard the story of how you came to the U.S.),
Teresa

Wow, what a wonderful gift you gave to all of us! Martha indeed shines laughter and light into my life, a devoted friend, and into all who know her.
Thank you, dear one,for sharing her, and the lovely story with the world. I join Teresa and many others who are in your fan club as well as Martha's!

Happy Birthday, Martha. Your mother is so special. I'm not surprised that her children are wonderful too!

It's been a while since I've read your blog.... and I love it.... almost as good as being in the room with you. I liked Sam's compliment, that with you he was never bored. Sounds just like him! And that's nice to remember.