The week of the party

On Monday my three daughters arrived. That was enough of a gift for me, for it was wonderful seeing them all together. Rare sight. They were here about five minutes and then the planning began. Jane was in charge of decorating the wonderful room we had arranged to use in St. Andrew Episcopal Church in Port Angeles. A large sunny room with eight large round tables. So we prayed for the sun to shine on the designated day and that nine or ten people could gather around each table. In addition to the room we could also use the memory garden with its roofed area for people who might arrive early. Wine and water and a few nibbles would be served there.

Gilbert who was performing in a play in Sequim, said we could have dinner in his house, and since he has a dishwasher and I do not, we quickly agreed to take our Lamb Shanks and mashed potatoes there. It was a joy again to see all of my four children in one room. I can not remember when that had happened. When Sam was sick Gilbert was missing, and when we had his, Sam's, requested party in his honor, Martha was missing. This was an occasion for the books. How lucky can one ninety year old be?

On Wednesday we girls shopped and then had lunch at the John Wayne Marina. Another wonderful memory. The sun was shining on all the masts and on the fishermen who were bringing in their catch while we were eating. Then a stop at Mad Maggie's where the girls all have been lucky in finding some treasure but this time it was my turn. I found hat I was going to wear for my party.

Wednesday evening we ate spagetti and went to see Gilbert in Cabaret. Fabulous play, and I ran into many people from long ago when Sam treaded the boards. The star of the show, who sang like an angel, remembered me from the time her father and Sam were poker players in The Odd Couple, and she and I had to find time to play during rehearsal. She was about eight or ten at that time.

Thursday we bought the already cooked chickens we needed for the chicken salad for Saturday. And all the other details for the party food. And then the chopping and slicing and stirring began. Anna was more or less in charge of that part of the preparations. Martha was making lists upon lists and we never could have survived without them. And Jane never stopped making tissue paper flowers for the tables. Everyone helped with this also. Except me. I sat in my chair and enjoyed the view. I am now ninety and I can do what I want! I tried one flower but it was too difficult.

The girls were sleeping in a nearby Cottage and that was a lifesaving stroke of luck. We could use their totally empty refrigerator and freezer. What luck. And finally it was Saturday. I will tell you next time about that Saturday.
Posted by svensto at 5:08 AM 3 comments:

Thank you, all, for commiserating with me about the loss of Cap. 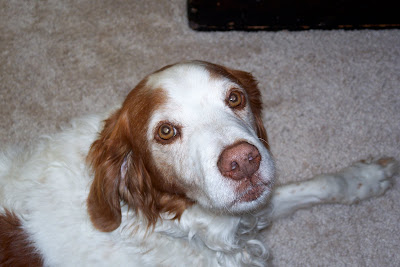 Someone asked about his history. Our son, Gilbert, owned a fine hunting dog, a Brittany. He still owns him, he is two years older than Cap was, and still in good shape. Twelve years ago Sam and I announced to the family that next time we returned from a planned trip, we would go to the pound and adopt a dog. Gilbert said he was going to have the first pick of the puppies that Rusty had fathered. He thought they would be ready to leave their mother by Christmas when we were supposed to visit them in Colorado.

When we arrived late in December we found this beautiful little puppy dog who looked like a smaller version of his father. He was the cutest dog we had ever met. January 4th when we flew back to Washington State he was old enough to travel in a little piece of luggage that fit under our seat on the plane. He remained for the rest of his life a beautiful well mannered dog. Our neighbors loved him as much as we did, and when I moved to this senior center cottage he was again beloved by the people who got to know him. His life changed and he became a more inside dog, but he had his friend to snuggle up to. This friend is now wondering what happened to Cap and he is still searching for him. A neighbor said to me the other day 'do you remember how Cap used to carry Edgar, the cat, by his head all but lost in his mouth. It was at first a scary sight but he never hurt the kitten.

My three daughters arrived last Monday to arrange a Birthday Party for Anna and me. You have never seen such an operation.
All decorations are homemade, the planning for the menu, the shopping, the laughing, the patience has been an experience to observe. Tomorrow is the big day. And then they all leave the next day. It is going to be difficult to see them go, but how lucky I am to have all these wonderful memories to look back on. And then Baseball season will begin and life will be thrilling again.
Posted by svensto at 3:17 PM 6 comments:

The reason for my absence from this page. It is so sad, it is hard to talk about. My best friend died last week. My dog, Cap, who was 14 years old, died with some help from his veterinary. He had a happy life, he was essential to my happiness, but he grew into old age with several discomforts. He lost much of his hearing, he had arthritis in his hips and he lost some of his appetite. When he lost control of his bodily functions he was utterly embarrassed and his big brown eyes asked for understanding. It was time for me to think of him and forget how much I was going to miss him. And so I said farewell hoping that in some later existence we would all get together again, Sam, Cap and I.

As most of you know I had my 90th birthday on the 25th of January. Anna, my eldest daughter had her 60th birthday on the 21st of the same month. Now her two sisters have decided to throw a party for her and for me on Feb. 20. And so the whole world is turning upside down with all the preparations for this approaching event. When it is over, I will tell you all about what happens. And then I will try to continue what I began when last we were in touch.
Posted by svensto at 9:49 AM 32 comments: