First I have to inform all of you that my son.in.law is the photographer in this house.. he took a picture this morning of my cat and their little feral kitty who is blind. 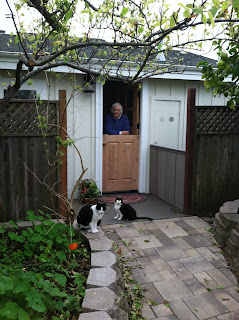 My Edgar who is thirteen years old, is slowly making friends and when I stand, looking out the dutch door four cats gather below looking for a treat. So far no trouble. Shopping in this town is fun. Although I feel fairly secure about finding my way, yesterday I fouled up completely. I decided I wanted to go into Santa Cruz proper and I got more or less lost. I never found the spot I had intended to be the place I honored with my presence. There were more one way streets going the wrong way. I was lucky for I never met a police man for a few times I think I sinned. When I fail I think of it as a new lesson in California living. I have many projects begun but some little detail keep me from plunging along. My sewing machine is in a repair shop and the repairman is on vacation. I had to get a new doctor, who naturally wanted tests on all my functions. Next Wednesday I will be done. Edgar and I love it here. Martha and Bob have been wonderful.
Posted by svensto at 7:18 PM 2 comments:

The title might confuse you. I am living in a house that could have been arranged by Santa himself. However there is no fireplace nor a chimney. Everything else seems as though there is a lot of his spirit surrounding us. I will give you one example of how things happen around here.
The other day I said something about English muffins. Years past when we visited our daughter and son-in-law they knew Sam and I liked an English muffin with our morning coffee. I mentioned the word and within five minutes Bobby had dashed to the store and there were English Muffins in the house. He said he remembered how he always had put some in the larder years ago.
The day progressed and I was looking forward to the morning delicacies. Then I remembered that I did not own a toaster. I could broil them in the oven. But the broiler was so low in my gas stove. I thought about the waste of turning on that big thing. 'I will dash downtown to get a toaster. I said 'Martha, I am going downtown to OSH. (Orchard County Hardware). Martha said can it wait till tomorrow?' I said,' yes of course' And so the evening progressed. I was knitting and watching MSNBC. I had locked the doors. Just about ready to go to bed. The phone rang. Bobby said 'open your back door' I did. there was Santa Bob with a fairly large box. He had been downtown and just as the store was closing had found a toaster oven on sale. We all had a toasted English Muffin. They with cream cheese and honey and I with cream cheese and Fig Spread. What a fun party we had.
My good friend from Carmel visited s on the week end. She found that she liked the FAKE IT IN FABRICS I have hanging here and there. I gave here my MATISSE book and said pick one of his paintings you like and I will make you one. That meant shopping for some supplies I had just given away when I moved. But what fun I had finding them. I have begun. Bobby said he wants to take a photo of each step I take. So you may all find a new hobby.
Time to get dressed and to clean the cat box. Edgar has been a real prince in this move. The trip down in the car seemed easy for him. And now getting used to three almost feral cats that live in our gardens is a trial for him. He has been behaving well and I think in a week or s they will all be good friends.
Posted by svensto at 8:52 AM 1 comment: 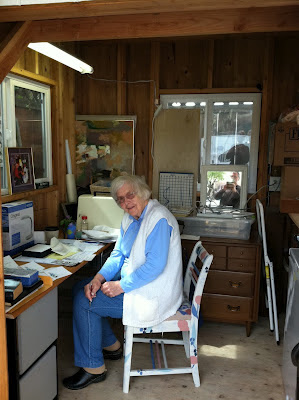 So many friends and relatives. 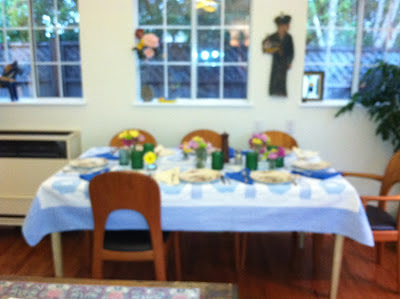 We have been entertaining. Karin from Montana came to spend the night with us. She left an hour ago to drive to Monterey, where she and her friend Paul are spending Spring Break. Paul was not about to leave the friends from his Shark counting days but Karin enjoyed herself with her Aunt Jan Shaw. And Donna was here. She is the ex-wife of Michael Shaw, Sam's half brother. And a couple of others more or less related ones. We sat at the table for hours with the question: Do you remember.
This little house is big enough to seat eight people for lunch. So much fun. Tomorrow Janice is coming with her daughter Kathy and we hope they will bring pictures of Kathy's grand daughter. Janice is coming from Carmel and Kathy will probably drive from Los Gatos to pick her up. I have not seen either of them for many years. Looking forward to another 'do you remember'. Kathy and Martha met when they were younger than four years old.
I feel totally settled in. Bob and I have been to Osh every day since we came. Osh is a hardware store and a garden store and it seemed every morning we discovered that there was one or two things that we needed to be absolutely happy. There is one more thing we have to get. I need the motor to my coffee grinder. I saw one at Bed Breakfast and Beyond. ( I know that is wrong but it got me a good laugh.)
So tomorrow another adventure.
Posted by svensto at 1:31 PM 1 comment: 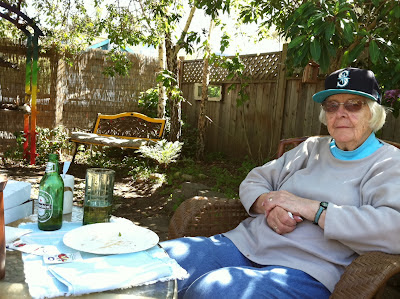 why I take several days between blogs. It is difficult to become settled in a new place. But now I am settled. All I need is a towel that is the right size for winding around my head after a shampoo. Bob and I went to Bed Bath and Beyond. They have millions of towels in hundreds of colors, But not a one in the size I want. So finally Martha found a Swedish terry cloth towel just twice as long as what I needed. (it had belonged to my sister. How she got it will be told in another tale) I cut it in half and hemmed the two thin holey pieces and NOW I am all set.
I have my shed all organized so I can sew on the machine, I can work on my computer, and I can paint flowers on small cards which I will send to friends to announce that I have moved.
Posted by svensto at 12:57 PM 6 comments: 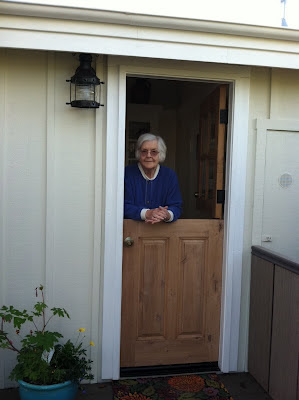 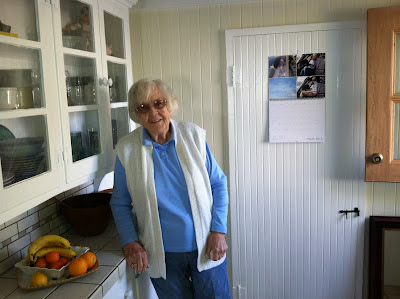 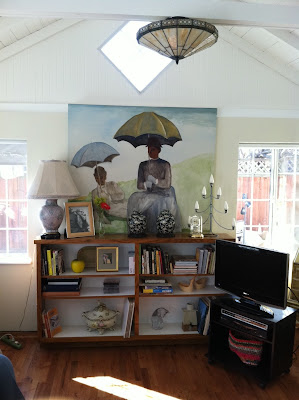 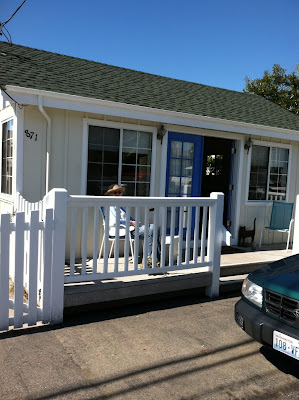 Suddenly Martha and her husband Bob told me they had bought a house next door to their house and that they called it Mom's House.
They wanted me to move next door to them in Santa Cruz, California. And then the question was, would I move.
My answer was, of course I would move. If they wanted me so close, what could be better.
Then there was the question.... When?
The first date discussed was the end of March.
Then Martha discovered she had a speaking date around that time.
After much haggling back and forth the moving occurred February 24. Luckily I had contacted Movers and found out it would take at least nine days before they could assure us of being able
to deliver the furniture after leaving Port Angeles. So Bob contacted a mover in Santa Cruz who assured us he would drive north, pick up my belongings and deliver them three days later.
Martha and I drove my car down in two and a half days. By the time we arrived the furniture had been deposited in more or less their correct places. There were, what seemed like one hundred and five boxes, and two days later they were all on the way to the dump. Everything is unpacked, flowers have been planted in my old pots. Today I bought a bouganvilla and a huge pot to plant it in. And today, after Martha helped me reprogram my computer, I can send a Blog again. (I had to patiently wait for Martha to send the manuscript of her third book to her editor)
And I think I can promise to be more punctual in my blogging.
I am so happy to be here.
Posted by svensto at 3:31 PM 19 comments: