What happened on Monday

After making an appointment on Friday, with a big shot from our local Y, I arrived at 7.45 AM on Monday. The parking lot was full and the Gyms were humming with all machines at full speed and mostly men panting, working up glowing patinas and much sweat.

My Y big shot who listened to my story about being totally graceless when attempting to rise from a sitting position and my desire to strengthen my quadriceps and my gluteus maximus introduced me to two chairs that she felt could improve the strengths of the two areas I mentioned. I did ten ups and downs with ease on the first one and then when I came to the second one I felt very insecure. My feet were sort of enclosed to make them feel secure, but the seat I sat on was a flat square surface, no bigger than a small book. I managed one push back, thinking I was going to run out of room in the back and land on the floor, but miraculously it stopped in time. The second one began OK, but half way back I fell off the chair, landed on my shoulder and my butt while my shoes were still tied in the foot thing. Luckily, as soon as my feet were untied I attempted to get up. My Y big shot and a gorgeous man who interrupted his work on a nearby machine helped me up.

After discussing my problem, I decided that I would attempt to strengthen my problem areas at home, and then I would join her class in balance when it begins in April.

There is no way could ever feel secure and dignified at that place. I hope they will hold the balance class somewhere else.
Posted by svensto at 9:10 AM 8 comments:

The reason for waiting

The party was a huge success.

Saturday was an unusually beautiful day. No clouds on the horizon and no wind. The girls were fully prepared and rose from bed with a song in their hearts. My neighbor, Mary Fran, who had been such a big help in securing the room at the church, said, let me know if I can be of help. She let them go earlier than first thought possible. And with that they began the decorating and the preparing the food. I was not there, but when I arrived the hall was decorated and the food was getting ready. Wine or water and cold and warm treats were served as people were arriving. It was wonderful seeing both old friends and new friends from my new digs. And then the time came to sit down to eat. We had never decided how people should sit, so it just happened. I would have liked to sit next to every one there, but that was impossible. A chair with a balloon tied to it was my designated spot. 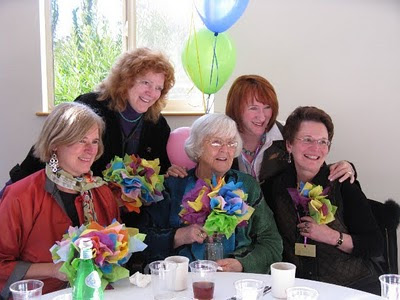 Several people have asked for the recipe for the OLIVE-STUFFED CHEESE PUFFS that were served before lunch. Here it is...
1 1\2 cups flour
2 cups finely grated sharp cheddar cheese (about 8 ounzes
i\2 cup unsalted butter, melted
4 to 5 dozen olives, well drained
Combine above items. Take about a teaspoon of dough, enfold the olive and shape into a small ball. Place balls on an ungreased rimmed cookie sheet and freeze for one hour. When frozen put balls in freezer bag and freeze until firm. Pre-heat oven to 400 degrees and bake until golden brown. About 15-18 min. 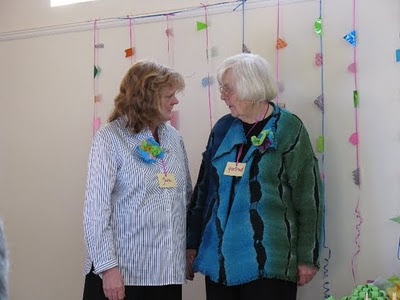 The main course was a chicken salad inspired by the Barefoot Contessa. What made ours better than anything I've tasted before was the addition of the Chutney. She mentioned col Gray's but I had made my own apple chutney. We used it freely and I could have eaten the whole huge dish of salad dressing with a large spoon. People are still raving on about how good it was. We bought seven or eight pre roasted chickens from Costco. And we bought the wine from Walmart at an embarrassingly low price and I, with my uneducated taste of wine, thought it was delicious.

The cake was ordered from a restaurant with a strange name. People around here pronounce it DUPIES. It is a French name that sounds ultra-elegant when you pronounce it correctly. DUPUIS. There was one chocolate cake and one lemon one and both were great.

For me the greatest part of the day was seeing old friends and hoping there was time to spend a few moments with each one. That was not possible, but I now have hopes of seeing each and every one for breakfast or for lunch so we can talk. Our friends from California were unable to come because of health reasons but Sam's nephew and wife came from the California and as it turned out they ere terrific at helping with the party. Sudenly they took it upon themselves to put all the dishes in the dishwasher that spews out hot clean dishes every five min. So when my three girls were finished restoring the place as it was when they arrived, the dishes were done . ( Janice, this was the spot were you called and we had our long talk. Which I enjoyed so much . Wish you had been able to come.) 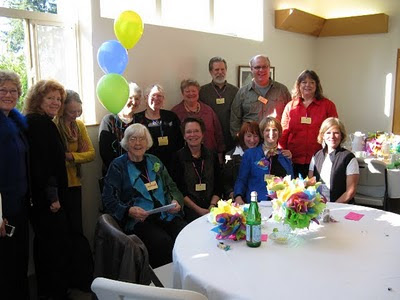 Martha and I had time one day for me to have a lesson on PLOT. I will spend the time trying to put all that knowledge to use on my blog. It concerns my short attempt to paint portraits of as many famous San Franciscans as I could get near. I had permission to paint the portraits of Bishop Pike, Don Sherwood, Herb Caen, Willie Mays and Governor Brown. I am sad to say that I only achieved two of them and I do not know if I failed to do the others because Bishop Pike died or because we moved, or because I was unhappy with the results of the two I did paint. You'll have to wait and see. With Martha as my Plot helper I should have an easy time. 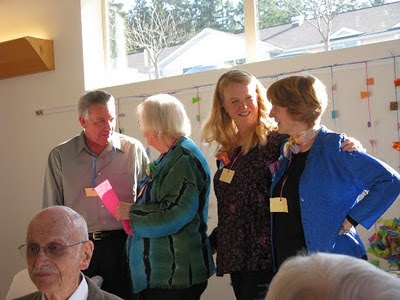